Kellie Gerardi is an aerospace & defense professional, author, and popular science communicator who has flown multiple microgravity research campaigns as a citizen scientist with Project PoSSUM, a crewed suborbital research program. Kellie is the author of Not Necessarily Rocket Science: A Beginner’s Guide to Life in the Space Age (available here!) Kellie is an active member of The Explorers Club, and in 2014 carried the Club’s prestigious flag on a crew expedition to the Mars Desert Research Station (MDRS), a prototype laboratory used by a variety of national space agencies and scientists to conduct analog Martian field research and simulate long-duration spaceflight.

As an aerospace and defense strategist, Kellie has partnered with a number of commercial spaceflight companies, NGO’s, and government agencies to accelerate and communicate the progress of the commercial spaceflight industry. Kellie serves on the Defense Council of the Truman National Security Project and leads Special Projects for the Commercial Spaceflight Federation, the U.S. trade association of leading commercial spaceflight organizations working to advance human spaceflight. Kellie previously led Business Development at Masten Space Systems, and served as the Program Manager for a DARPA workshop series focused on the commercial transition of  technology from the Experimental Spaceplane (XS-1) Program.

Kellie’s work in bioastronautics and human factors has earned her hundreds of thousands of fans across social media and her work has been featured across a broad range of television and print publications, including guest appearances on ABC’s “The View” and “Nightline”, and profiles in Vogue, Popular Mechanics, and The New York Times. In 2016, Kellie released a limited-edition, space-inspired fashion line under the label Paper Rocket, which is also the name of her popular space fashion and style website.

Kellie lives in Washington, D.C. with her husband Steven, and their daughter Delta V. You can connect with @kelliegerardi on Instagram or TikTok! 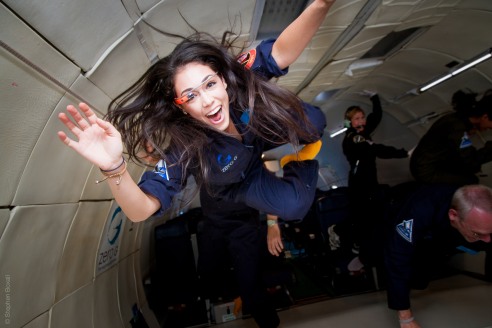